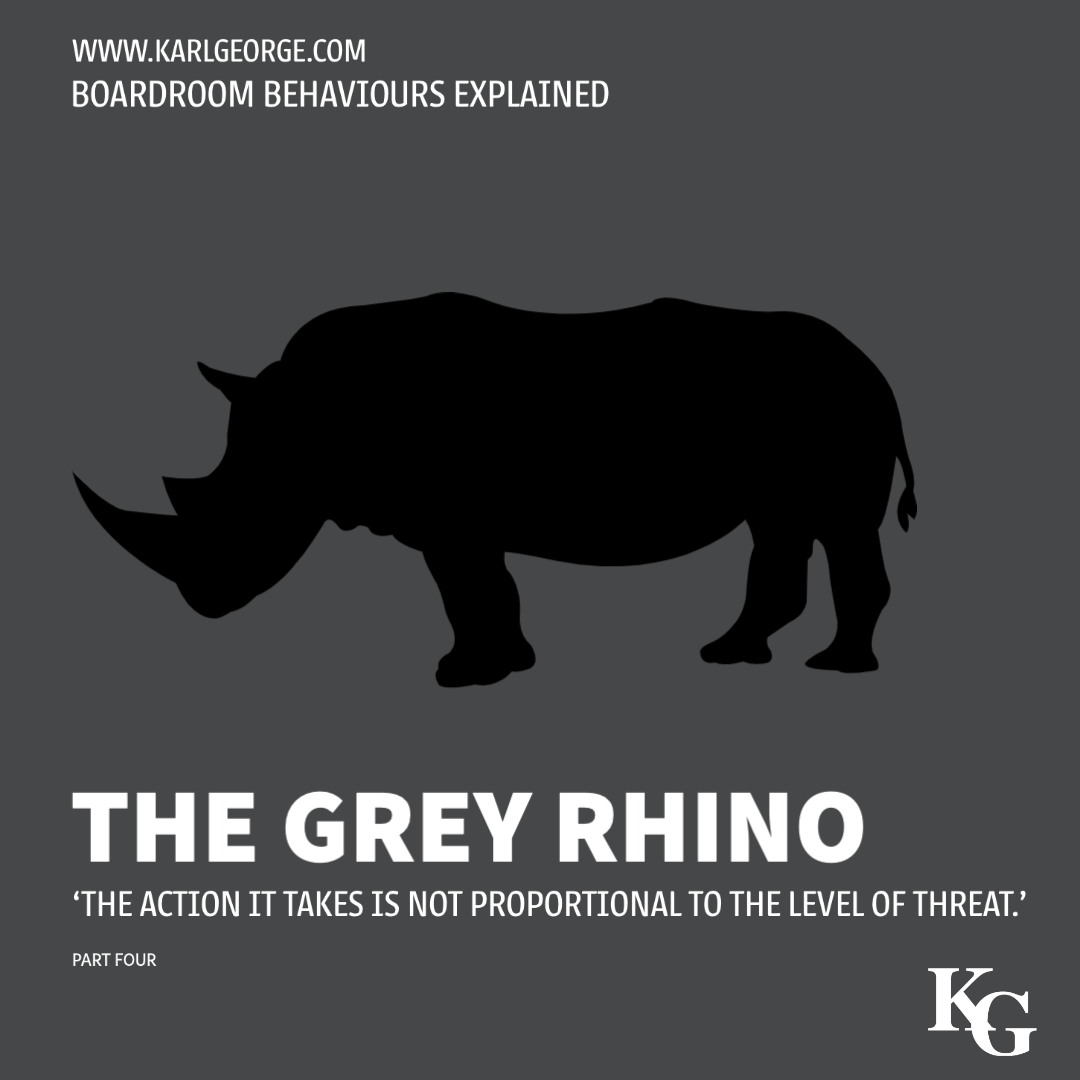 The book Gray Rhino by Michele Wucker looks at how we should recognise and act on the obvious dangers that we ignore.

In the big bad wolf scenario, a board is aware that there is a problem or a challenge to face down, but the action it takes is not proportional to the level of threat.

This is a large threat coming towards you. It’s highly obvious and probably dangerous.

It’s a menacing, big bad wolf, the fourth and final animal I am using in this series of articles to represent the dysfunctional behaviours of the boards of some businesses and organisations.

The book Gray Rhino by Michele Wucker looks at how we should recognise and act on the obvious dangers that we ignore.
In the big bad wolf scenario, a board is aware that there is a problem or a challenge to face down, but the action it takes is not proportional to the level of threat.

This is neglect, because although the board is fire-fighting it is failing to deal with the root cause.
It’s a type of procrastination. The problem is so big, the board is shell shocked and keeps putting off a root and branch review.

An individual board member displaying these traits would be the rabbit. He, or she, is a rabbit in the headlights, suffering from analysis paralysis.
Let’s look back at the collapse of Thomas Cook as an example of what I mean. Thomas Cook knew that technology posed a massive threat. The traditional package holiday operator model was unsustainable. People could book directly with more ease than ever before. But the board at Thomas Cook proved unable to respond to the changing market place. They knew that the whole sector was being disrupted, with low-cost carriers entering the market and the world changing around them, but they didn’t do enough to avoid disaster.

Remember Blockbuster, the massive video rental chain? Like Thomas Cook travel agencies, there seemed to be a Blockbuster store in every UK town and city in the late 1980s and 90s. In the United States, they also owned 9,000 video rental stores. They came to dominate the market, largely because a unique bar code system helped them keep track of a huge range of titles and chase lucrative late return fees.

Netflix was founded in 1997 as a DVD-by-mail rental service – with no late fees. Blockbuster had the chance to buy Netflix for $50million dollars two years later, but said no. Instead, Blockbuster took part in an early experiment into creating a video on demand platform, but in the end it chose to focus on its bricks and mortar shops. The opportunity was there for Blockbuster to be where Netflix is today. Instead they filed for bankruptcy in 2010.

Next time, we’ll turn to look at two examples of positive board behaviours – the lion and the eagle.