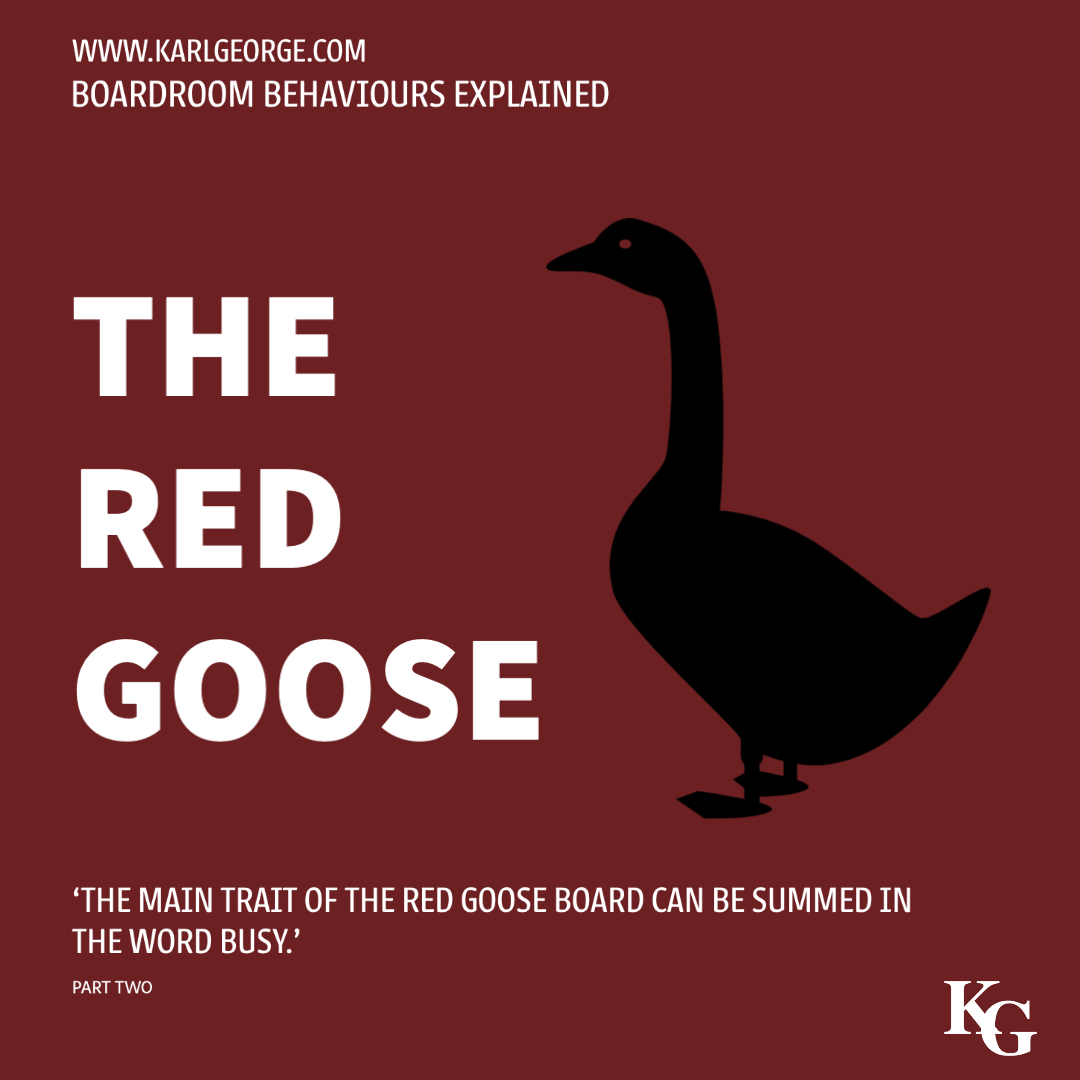 The main trait of the red goose board can be summed in the word ‘busy’. Here, there is a lot of activity going on – but it’s the wrong kind of things. People are running around in circles but not actually achieving anything. They are on a wild goose chase.

Welcome to the second in a series of articles that examine the collective dysfunctional behaviour of the boards that lead some of our businesses and organisations.

Last time, I introduced you to the concept of four types of dysfunctional behaviour that boards, collectively, can demonstrate. They are represented by the black swan, the red goose, the white elephant and the grey rhino.

Last time we looked at the black swan who denies the existence of a problem and takes no action. This time we turn to the red goose.

The main trait of the red goose board can be summed up in the word ‘busy’. Here, there is a lot of activity going on – but it’s the wrong kind of things. People are running around in circles but not actually achieving anything. They are on a wild goose chase.

Like the black swan, there is a problem of lack of knowledge – but the red goose board thinks it knows what is going on. In fact it doesn’t know enough, and so the things it does have little or no impact. The board is very operational and not strategic enough.

There’s an old proverb that says someone who ‘knows not, and knows not that they know not’ is stupid. That would sum up the black swan, but the following line captures the red goose: ‘A person who knows not, but believes they know, is dangerous’.
The busy bee would be the animal representing this type of behaviour in an individual board member. They fail to realise that simply putting in the hours and being a busy fool won’t stop a business or organisation failing.

An example of this type of frantic activity was seen in the regional newspaper industry, and to some extent the BBC, as they tried to adapt to the arrival of the Internet.

Regional newspapers were huge, influential sources of information and entertainment in the 1980s and early 1990s. They made millions through local advertising and had loyal readerships in their towns and cities.

When the internet came along in the 1990s, many newspaper boards initially took a black swan approach. They didn’t see it and therefore it didn’t exist and they did nothing.

As time went on, and the existence of the internet could no longer be denied, many regional newspapers became red geese. They knew a bit about the internet, but thought they knew more than they did and they embarked on lots of different activities. They ran lots of websites and internet projects and jumped from one activity to another, rebranding and renaming and restructuring time after time throughout the early 2000s. Meanwhile, newspaper readerships plummeted and the advertising they had taken for granted for many years began to disappear. Many businesses found they could reach their audience more cheaply and effectively online and on their own terms.

The BBC also went down a lot of blind alleys in the early 2000s, busily developing lots of new digital services, website spin-offs and platforms that took it away from its core offering.

Next time I’ll look at an animal that’s a close relative (despite their size difference) of the red goose and that is the white elephant.

The white elephant can become useless because he knows something is wrong but CHOOSES to ignore it.